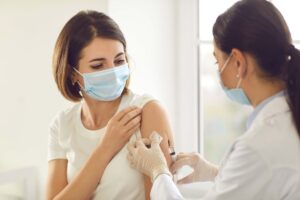 There have been a few cases reported recently regarding the Moderna Covid-19 vaccine causing an inflammatory response in people who had injection of dermal fillers in their face. This news has precipitated concerns in some women who have had either a breast augmentation or breast reconstruction about the possibility of the vaccine also causing similar issues with their implants. There are others who either are debating getting the vaccine or already have had it who are interested in having a breast enlargement in the future.

So, does the vaccine pose a risk to women who either have a breast implant or are planning to sometime in the future?

From what is presently known from those who have already had the vaccine, there are no reported cases of it causing untoward issues with breast implants. And, we are talking about a lot of people here. In fact, according to Bloomberg News, as of January 26, 2021 there have been 24.5 million doses administered in the United States and more than 71.3 million worldwide.

This is not to say, however, that the vaccines will be absolutely 100% risk free with regard to potential effects on breast implants. It could be that with time one or more issues will arise revealing that there can be problems. However, it should be at least somewhat reassuring that after tens of millions of doses of Covid-19 vaccine administered, no breast implant adverse reactions have been reported.

And one more thing…

There are many well-informed female plastic surgeons with breast implants who were not concerned about this “issue” and proceeded in getting their vaccinations.

That should tell you quite a lot.

The way that I see it, given the present available knowledge, is that the far more important question is whether getting the vaccine is an appropriate choice for you. This is a decision that you personally should make – weighing multiple factors, using some critical thinking skills and excluding the implant factor.