With the advent of liposuction in the 1980’s, surgically addressing a fatty neck/double chin became far easier, more predictable and with less down time than existing approaches. Often, the only incision needed was a small one near the crease below the chin measuring around 4mm in length. Liposuction of the neck became extremely popular and THE treatment of choice as well as the gold standard for which other potential techniques were compared to.

With changing cultural preferences, economic pressures, other factors and Millennials, non-surgical options have been sought that require little if any down time even if the results are not near as good as those that can be obtained with surgery.

And for men, in particular, that is just fine.

The two most notable non-surgical options for the treatment of a double chin/fatty neck are Kybella® and CoolSculpting®. Kybella® treatments involve injections of deoxycholic acid, a naturally occurring substance present in the body, into the fat deposits of the neck, destroying fat cells (Kybella®: Non-surgical Treatment for Double Chins and Neck Fat). CoolSculpting® uses the application of cold temperatures for a predetermined period of time in order to selectively kill fat cells.

The Kybella® treatments are designed to be precise and customizable for every patient’s unique situation. Each treatment session takes only about 15 to 30 minutes though the injection time is only a few minutes. Cool packs are applied right afterwards for comfort and to minimize swelling and can be continued intermittently for 24 to 48 hours. Most people return back to work the next day or two.

It is recommended to wait at least six weeks between sessions for the best results. The majority of patients will require two to three sessions with only a small percentage needing four.

A good example of what can be accomplished with Kybella® is this 39 year old patient of mine. He did not like his double chin and wanted it treated – but not with liposuction (photos A, C and E). After learning about the pros and cons, risks and complications and the limitations of this non-surgical approach, he proceeded with the Kybella® injections, undergoing three sessions that were each more than 6 weeks apart. His results can be seen in photos B, D and F. 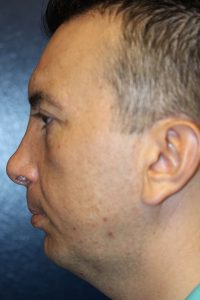 A) Before Kybella® treatment 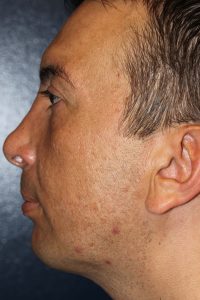 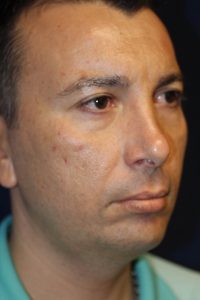 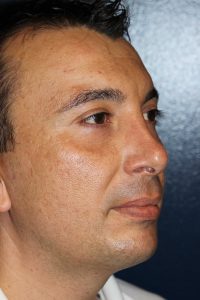 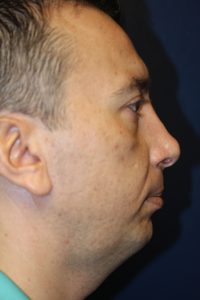 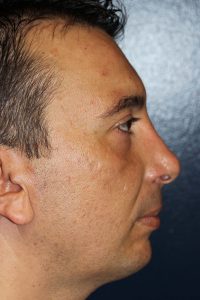 He was not only extremely happy with the results but was also quite impressed that this was able to be accomplished without surgery or time off from work.

If you are considering Kybella® for the treatment of your double chin/fatty neck, you can call my office at 480-451-3000 to schedule your complimentary consultation.