Breast ptosis, the medical term for drooping of the breasts, occurs to some degree in a vast majority of women who have at least some breast volume present. This is the inevitable result of a combination of loss of elasticity of the skin of the breast and the stretching of underlying tissue support “fighting” against the unrelenting forces of gravity. The picture is not a very pretty one for the many women who want to regain or obtain that more youthful, firm, voluptuous, alluring shape. Furthermore, there is a negative impact on their self-confidence, sexuality and allure.

What can be done to either recoup or obtain that youthful, perky and sexually attractive shape?

Clearly, a breast lift (mastopexy) with or without implants (breast augmentation) will provide the rejuvenation of the breasts with lifting, recontouring, tightening and even adding volume. This can be facilitated employing incisions that range either from one just around the areola to an anchor shape one that also involves a vertical and horizontal component. Unfortunately, many women are very apprehensive about these incisions which ultimate become “scars” and want to avoid them at all costs.

A question that I am frequently asked and which many women have as also evidenced by myriad postings online is: “Can I just get much bigger implants to avoid having to do a breast lift?”

Often, women either know other women who have pursued this approach or they were told this in consultation with other physicians, many who either didn’t have the experience, sensibility or training regarding this issue or lowered their standards in order to “close the deal” and perform the surgery. It is unfortunate that these physicians, quite often not plastic surgeons, wouldn’t do what was in the best interest of their patients just to make a buck (or lots of bucks).

Personally, I will either do what is right for my patients or won’t perform the surgery. It’s all about principles. Period!

Now, why is placing too large an implant in the breast in order to avoid having to do a breast lift a very bad idea?

Let me explain this briefly. The skin is already thin (or thinner) with decreased elasticity (stretchiness) with breast ptosis. Placing an even larger implant than is ideal will stretch out and thin the skin even more. Added to this, many of these physicians recommend that the best way to counter the drooping breast skin is to directly stretch it out by placing the implants above the muscle. What eventuates is that the breasts descend at a more accelerated pace lower on the chest and abdominal wall. The granny breast caricature (no offense to grandmothers)! 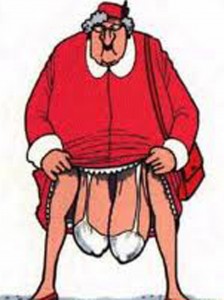 Not a pretty picture!

Ultimately, the only treatment of this would be a complex reconstruction that would require an anchor shaped scar (which may or may not have been originally recommended) and possibly one or two procedures. The skin will be much thinner and less elastic than it would have been had the appropriate procedure been performed initially. The final outcome, after spending at least double or more the amount of money than it would have originally cost, will always be significantly inferior to what it could and should have been. Add to this the extra down time, discomfort, inconvenience, etc. and you should easily conclude that not pursuing the correct procedure was a very poor choice.