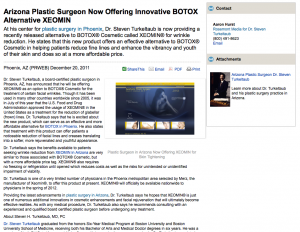 At his center for plastic surgery in Phoenix, Dr. Steven Turkeltaub is now providing a recently released alternative to BOTOX® Cosmetic called XEOMIN® for wrinkle reduction. He states that this new product offers an effective alternative to BOTOX® Cosmetic in helping patients reduce fine lines and enhance the vibrancy and youth of their skin and does so at a more affordable price.

Dr. Steven Turkeltaub, a board-certified plastic surgeon in Phoenix, AZ, has announced that he will be offering XEOMIN® as an option to BOTOX® Cosmetic for the treatment of certain facial wrinkles. Though it has been used in many other countries worldwide since 2005, it was in July of this year that the U.S. Food and Drug Administration approved the usage of XEOMIN® in the United States as a treatment for the reduction of glabellar (frown) lines. Dr. Turkeltaub says that he is excited about the new product, which can serve as an effective and more affordable alternative for BOTOX in Phoenix. He also states that treatment with this product can offer patients a noticeable reduction of facial lines and creases translating into a softer, more rejuvenated and youthful appearance.

Dr. Turkeltaub says the benefits available to patients seeking wrinkle reduction from XEOMIN in Arizona are very similar to those associated with BOTOX® Cosmetic, but with a more affordable price tag. XEOMIN® also requires no freezing or refrigeration until opened which reduces costs as well as the risks for unintended or unidentified impairment of viability.

Dr. Turkeltaub is one of a very limited number of physicians in the Phoenix metropolitan area selected by Merz, the manufacturer of Xeomin®, to offer this product at present. XEOMIN® will officially be available nationwide to physicians in the spring of 2012.

Providing the latest advancements in plastic surgery in Arizona, Dr. Turkeltaub says he hopes that XEOMIN® is just one of numerous additional innovations in cosmetic enhancements and facial rejuvenation that will ultimately become effective realities. As with any medical procedure, Dr. Turkeltaub also says he recommends consulting with an experienced and qualified board certified plastic surgeon before undergoing any treatment.

Dr. Steven Turkeltaub graduated from the honors Six-Year Medical Program at Boston University and Boston University School of Medicine, receiving both his Bachelor of Arts and Medical Doctor degrees in six years. He was a member of both Phi Beta Kappa and Alpha Omega Alpha, graduating summa cum laude. Dr. Turkeltaub completed his general surgery residency at the University of Miami/Jackson Memorial Hospital and the Northwestern Medical Center in Chicago. He also trained extensively in plastic surgery at the University of Massachusetts Medical Center. Dr. Turkeltaub subsequently served during an academic appointment as Clinical Instructor and Attending Physician in Plastic and Reconstructive Surgery. He is a member of the American Society of Plastic Surgeons, the Arizona Society of Plastic and Reconstructive Surgeons, the Arizona Medical Association, and several other professional organizations. Dr. Turkeltaub is board certified by the American Board of Plastic Surgery and has been rated and awarded as a Patients’ Choice Physician.