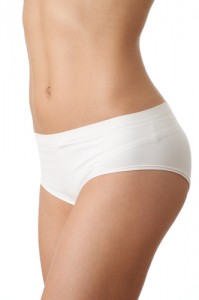 Drains, which are flexible silicone tubes that are connected to a reservoir known as a bulb, allow for the egress of fluid which could accumulate between the skin-fat layer and the underlying muscle. They have been used in abdominoplasties (tummy tucks) for decades for the purpose of minimizing the incidence of fluid accumulation, known as seromas. Most commonly, two drains are placed for a full tummy tuck whereas only one is used for a mini tummy tuck.

There are some plastic surgeons who don’t use any drains – touting a suturing technique that they feel makes their usage unnecessary. This approach hasn’t convinced most plastic surgeons yet and so it is presently employed by a minority.

The drains are typically placed either in the vicinity of or within the abdominal incision itself and remain in place until 24 hour drainage totals decrease below a particular numeric level. The amount used as the metric does vary among physicians. Many use a number of 20cc or less over a 24 hour period for 1 – 2 days; others consider up to 30cc or even more within a 24 hour time frame. There are even some plastic surgeons who largely ignore the drainage quantity and, instead, use the element of time – removing them after a fixed period such as a few days or at one week.

How long can you expect that the drains will be left in for?

Unfortunately, the duration of time that the drains will remain in place after a tummy tuck is extremely variable among individuals and can’t necessarily be predicted prior to surgery unless, of course, a fixed period of time is used. I use relatively strict criteria before the drain tubes are sequentially removed in my patients and this clearly seems to minimize the risk for the development of a seroma. Most of my patients will have both of their drainage tubes removed by two to three weeks; many in less than a week and a half. It is the very rare patient whose drains remain in place for more than four weeks.

The down side for either taking out the drains too soon or failure of the approach that doesn’t use drains is the undesirable accumulation of fluid deep to the skin (seroma). This problem needs to be treated either by repeated (that is, on multiple occasions) aspirations of the fluid which entails the sticking of a needle into the tissues in order to remove the fluid or even the re-insertion of another drain. On rare occasions, surgery may be required to address what can become a fixed and deforming accumulation of fluid.

For more information on a tummy tuck or on any other plastic surgery procedure that I perform or to schedule a complimentary consultation with me, you can call my office at 480-451-3000.