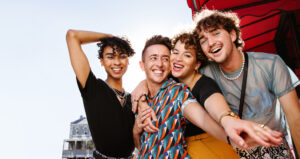 All things transgender increasingly have been occupying the social consciousness and dialogue of our society over the last several years. There are many reasons for this but that is a subject for another day.

The percentage of individuals identifying as transgender and gender nonbinary also appears to be dramatically rising with time and by generation. Some of this increase may be organic whereas some may be due to greater acceptance by society along with other factors.

It has been well documented that the percentage of individuals identifying as LGBTQ+ has dramatically increased over the last seven decades. A Gallup poll done in 2021 revealed that 2.6% of Baby Boomers identify that way versus 10.5% of Millennials and 20.8% of Generation Z.

That is an incredible 1000% increase!

So according to those numbers, in only 10 years there has been a doubling of the percentage of the total population of American adults who consider themselves to not be heterosexual.

Can such an astronomical increase be entirely real?

Is there more at play here?

In time, will many of these individuals have a change of heart and mind – and gender identity?

Only time will tell.

There is important relevance of these questions and the potential answers as relates to those individuals identifying either as transgender or gender nonbinary and who go on to seek gender affirming surgery in order to address their gender dysphoria.

Will a significant number change their mind over time and have buyer’s remorse?

Will there be a substantial percentage of individuals who then seek to de-transition?

This information is REALLY important to know.

Recently, there has been greater publicity and awareness that not everyone that has undergone gender affirmation surgery has been happy with their decisions. We are hearing more and more of individuals regretting their surgical transition and the permanent and devastating effect that it has had on their lives.

What exactly is the percentage of people who have transitioned and now have regretted their decision?

A study that investigated this specific issue was recently published and can give us a reasonable assessment of this. In addition, there are also numbers from 30 and more years ago that can provide us with some interesting insights into this issue over time.

Research published by Pfäfflin in 1993 (Pfäfflin F. . J Psychol Hum Sex. 1993;5:69–85), that was based on his patients and previous publications determined that the incidence of regret for undergoing this surgery was between 1% to 1.5%. This extremely low number is even more remarkable given the fact that such gender affirming surgery was essentially still in its infancy.

In 1998, only five years later, Kuiper published his findings based on research of his own 1100 patients. This revealed an even lower percentage of regret – 0.9% (Kuiper AJ, Cohen-Kettenis PT. Gender role reversal among post-operative transsexuals. Int J Transgenderism. 1998;2).

A large and contemporary study of this issue of gender affirmation surgery regret was just published in 2021. Titled “Regret after Gender-affirmation Surgery: A Systematic Review and Meta-analysis of Prevalence”, it examined the results and information contained in 27 previously published articles that had passed a rigid vetting process. It involved a total of 7928 patients from 14 countries with 33% having had trans-masculine (FTM and FTN) and 67% trans-feminine ones (MTF). These procedures included top surgery, bottom surgery and facial procedures.

Essentially the same rate as was determined around 30 years ago – when this type of surgery was in its earlier stages and a lot less sophisticated.

For that 1% or less that experienced regret at their decision, the most common reasons were difficulty or dissatisfaction with their new gender role or problems with acceptance with this change, especially from family and friends.

There definitely is subjectivity as to what constitutes regret for having undergone gender affirming surgery and this can lead to less than precise results. However, it is fascinating and even perhaps somewhat unexpected that a few independent assessments involving different time periods and comprising a time span of greater than 30 years all revealed the incidence of regret for having undergone gender affirming surgery to be only around 1%.

Given a multitude of diverse factors including strong societal influences and other forces nowadays, it would not be surprising if this number does increase going forward.

As for our top surgery patients, our unwavering goal has always been to make sure that each and every patient is thoroughly assessed and vetted for the appropriateness of such a procedure in order to maximize the likelihood that this will be a positive and life changing experience for them rather than ultimately being a source of regret.