Skip to main content
Posted on May 3, 2010 in Earlobe, Keloid, Scar

In my practice at the Arizona Center for Aesthetic Plastic Surgery, I see and treat a lot of patients who have keloids. Many people have the misconception that if a scar is wide, dark or large it must be a keloid which is not necessarily the case. A keloid is specifically an elevated and firm scar that extends beyond the margins of the initial wound or surgery site, does not regress spontaneously and can be difficult to treat. It is often aesthetically displeasing in appearance and frequently is associated with symptoms such as pain, burning or itching. 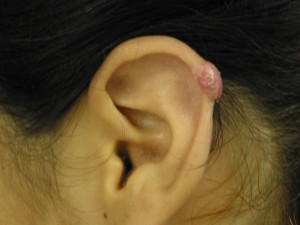 Keloid of the ear

There are several risk factors that predispose a person to develop keloids though their formation is not “inevitable”. Many high risk individuals never develop them whereas some people without any discernable risk factors can form them. Among these factors are being dark complected, age less than 30 years, burns, ear and earlobe piercings and injuries or surgery to the sternum and to a much lesser extent, the shoulders and upper arms. Certain orientations of these wounds also elevate the risk. 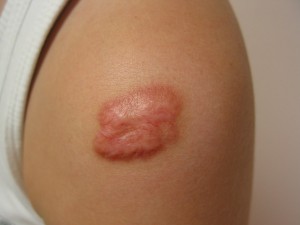 Keloid of the upper arm 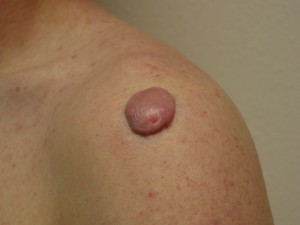 Keloid of the shoulder

There are several treatment options available but effectiveness is increased with a lower incidence of recurrence when these are combined. The most commonly employed approaches include pressure dressings, steroid injections, topical silicone gel sheeting and surgical excision. More rarely employed treatments include using a pulsed dye laser, radiation treatments and intralesional injections of chemotherapy agents. Treatment should be individualized for each patient and would be determined by several factors.

The overwhelmingly most common area affected by a keloid that I see is the earlobe with the sternum being a distant second. I have seen them in every race – Caucasian, Hispanic, Asian-American, African-American, Native American, etc. – and in both females and males. Unless the keloid is extremely small (which is rare), the approach that I usually recommend and which is highly effective is for both surgical excision and steroid injection at the same time with possible re-injection a month later. Patients are then followed up on a monthly basis for any evidence of recurrence which can occur even up to several years later. At the first sign of possible regrowth, I will aggressively re-inject with the steroid medication.

If you have any questions on the treatment of keloids of the earlobes or any other area, on scars in general, or on any other plastic surgery procedure that I perform or if you would like to schedule a complimentary consultation with me, please call my office at 480-451-3000.