Over the years, I have seen and treated countless patients with keloids in diverse anatomic locations and in virtually all ethnic groups. Though most commonly seen in the earlobes and ear as a consequence of piercing, they can develop elsewhere, particularly on the sternum, shoulders and upper arms. (See Risks, Diagnosis and Treatments of Keloids of the Earlobes and Other Areas.) Not only can they be unsightly but they can also be very symptomatic – painful, itching and restrictive. 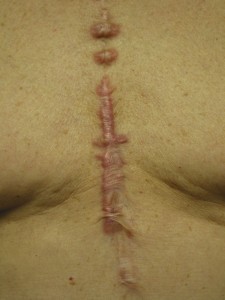 Keloid of the sternum - vertical 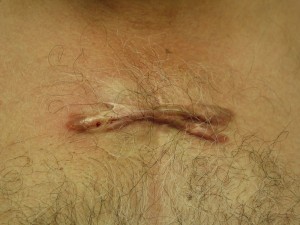 Keloid of the sternum - horizontal

Treatment of keloids can be frustrating for many patients due to their high risk of recurrence particularly when they are not comprehensively treated and the affected areas not closely monitored. I have successfully treated many patients who first had their treatment elsewhere by surgical excision with or without steroid injections and then were not closely followed up by their doctor. Often, they presented to me with a recurrence that was much larger than their initial keloids(s).

So what do I recommend in order to effectively deal with these keloids?

For most keloids except the extremely small ones (which are rare), my approach is for surgical excision with immediate injection of a steroid medication. Then, my patients are followed on a monthly basis for evidence of regrowth and for possible additional steroid injections. Some do receive “prophylactic” injections in the affected area(s) for a few months to further help to reduce the risk of recurrence.

Most patients are subsequently seen every few months for up to a year and a half or more as the highest risk of recurrence is within this period of time. If my patient discerns any potential evidence of a regrowth, he/she is instructed to see me immediately. This approach seems to effectively deal with recurrence of keloids in most all patients.

There are other adjuncts to surgery which also can be used. One of these is radiation therapy starting within 24 hours of surgical removal. Just like the other approaches, this is not effective 100% of the time.

For more information on keloids, scars or on any other plastic surgery procedure that I perform or to schedule a complimentary consultation with me, please call my office at 480-451-3000.