Who knew that the harmless but descriptive term “blonde bombshell”, an epithet for a voluptuous, well endowed, drop dead gorgeous blond woman could one day be taken literally?

The same goes for the expression that “she has killer boobs”. 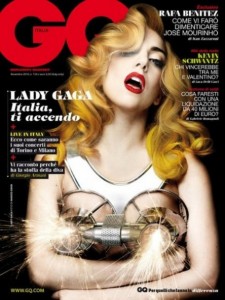 This weaponized breast/bra approach will definitely capture the attention of airport security.

Our world is being threatened by religious forces of evil and hatred that are twisting and perverting scientific, technological, aesthetic and medical advances for destructive purposes. This is not unlike many previous groundbreaking advances such as controlled nuclear fusion and fission that can be employed for peaceful purposes like nuclear power plants or for war and lethal uses as in annihilative nuclear weapons.

Now it seems that even a breast augmentation can be used for nefarious purposes.

What is the world coming to?

What is this all about?

Islamic terrorist groups are seeking to use implantable explosive devices that won’t raise suspicions and are nearly impossible to detect, allowing the terrorist to effectively evade security in order to wreak havoc on airplanes and elsewhere. Breast implants are the ideal readymade device to accomplish these nefarious acts. They are large enough to hold a highly lethal amount of explosives that could predictably blow a plane out of the sky. Pectoral and buttock implants are other possibilities that also would not raise much suspicion.

How can this be done?

The implants, which normally may be filled with saline can instead, be filled with an explosive such as PETN which is stabile until a chemical reaction is initiated. This reaction is simply precipitated by injecting the chemical trigger into the implant at the desired time which is accomplished by puncturing the skin with a sharp device that contains the element. The object can be modified and disguised to appear as a nondescript pen. All the terrorist has to do is just pull out the device and stab himself/herself to initiate the lethal reaction. This can be performed anywhere on the plane: while sitting in a seat, in the restroom or even near the cockpit.

The only good news about this is that if you had an “irrational” fear of flying before, it is at least not so irrational any longer.

Finally, to paraphrase a slogan from the 60’s so as to apply it to breast augmentation surgery: Make love, not war!

For more information on peaceful uses of breast implants or on breast augmentation surgery, please feel free to contact my office at 480-451-3000.