Women’s breasts are usually associated with beauty, femininity, warmth and nurturing. Millions of women have undergone breast augmentation surgery in order to feel more attractive and sexy with larger breasts. A majority of men can be positively affected by the sight of these firm, sizable and shapely breasts. And, they can often be skillfully manipulated by the women endowed with them in order to obtain many of the things that they covet.

Breasts are “objects” that generally represent health, happiness and goodness. And they are a win-win for both the woman and her partner.

Unbeknownst to most, however, there can also be a dark side to substantially sized breasts. That is, they can potentially be used in the commitment of heinous, evil, life threatening acts.

Yup! It is true indeed. I’m not making this up. There actually is a true story, occurring in Germany, that validates this.

You see, a 30 year old German man, a practicing lawyer, claimed that his 33 year old girlfriend tried to kill him by using her 38DD breasts in attempts to suffocate him during sex. According to him, her motivation for this was her jealousy of his successful career (see photo). 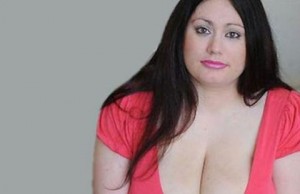 The actual girlfriend viewed with her lethal weapons

In court he testified that: “I was sitting naked and I was kissing her breasts when suddenly she (sic) grabbed my head in, pushed it between her breasts, and held my head with all her might. I could not breathe, I must have turned blue. I could not tear myself free and thought I was going to die.”

Fortunately for him, he was ultimately able to free himself from her “crushing” cleavage and run away terrified into a street – NAKED. By this description, I assume that his testosterone level was undetectable. As for the type of law practice he must have had, it most definitely wasn’t as a prosecuting attorney. Furthermore, the publicity arising from the newspaper stories detailing this incident doubtlessly were not very helpful in attracting new clients to his practice.

His ex-girlfriend subsequently admitted her intentions which were premeditated: “Treasure (boyfriend). I wanted your death to be as pleasant as possible.”

Hopefully this won’t become a trend or meme where vindictive or malicious women seduce men then attempt to suffocate them with their massive mammaries. If you are a guy and are going to be murdered by your jealous or uncontrollably enraged wife, girlfriend or other woman, this is probably one of the better ways to die.

Women, if you are interested in undergoing a breast augmentation or a breast lift with implants, do it for yourself and with only peaceful and loving intentions.

And as for you men, you now have that little extra motivation to support your over-endowed significant other when she states that she would like to have a breast reduction.

If you would like more information on breast augmentation or breast reduction surgery or for any other plastic surgery procedure that I perform, or to schedule your free consultation with me, please call my office at 480-451-3000.