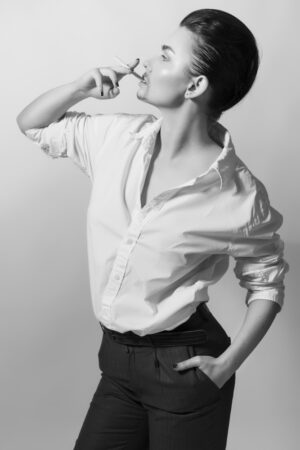 It is known that transgender individuals and more specifically, transmen and gender non-binary, face significant psychosocial issues for a multitude of reasons. Feeling like you were born in the wrong body and are now trapped there along with challenging societal forces leads to anxiety and depression. The dislike, disgust and even rejection of one’s body’s sexual features is the basis of gender dysphoria.

This may be old news to you if you are a transman or are non-binary trying to live and function normally in society.

But, how prevalent is this anxiety and depression?

Is your anxiety and depression very common or unusual?

A well designed prospective study was conducted by the Section of Plastic Surgery at the University of Michigan and the Division of Plastic Surgery at the University of Southern California to determine the prevalence of these issues. This involved 103 individuals who were seeking gender affirming top surgery. They completed a variety of standardized and validated preoperative mental health screening tests. In addition, these patients were also compared to published normal values for cisgender men.

The findings revealed that for transmen and gender non-binary individuals, the actual pre-operative anxiety and depression incidence was 66.3% and 70.3% respectively. This was inclusive of mild to severe cases. However, for this same cohort group, only 29.8% had been previously diagnosed with anxiety and 25% with depression.  In addition, when the study results were compared to the cisgender controls, these rates of anxiety and depression were far higher and statistically significant.

What are the key takeaway points here?

First of all, the transmen and gender non-binary population face a far greater prevalence of anxiety and depression than the general population as a whole. Intuitively, this should not be surprising at all. If you are a transman or are non-binary, you likely already know this.

The second point is even more important and relates to the overall mental health of the transgender population and implications. There is a far higher prevalence of anxiety and depression than is being recognized and diagnosed. This may be due to these individuals not seeking out therapy or because mental health professionals have failed to make the diagnosis though there are probably other reasons as well.

Regardless, what is evident is that far more transmen and non-binary individuals are in need of mental health care than are obtaining it. Such care can go a long way in helping them address their issues head on allowing them to be happier, more functional and productive with greater self-esteem.

So, if you are a transman or gender non-binary and feel that you have issues of anxiety, depression, poor body image or other mental health issues, it would be both very wise and beneficial for you to seek an evaluation and care by a qualified mental health professional specializing in transgender issues.