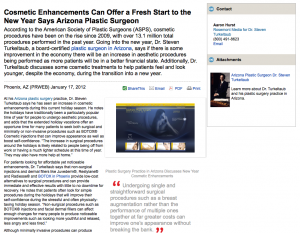 Arizona Plastic Surgeon on Boosting Confidence in the New Year

According to the American Society of Plastic Surgeons (ASPS), cosmetic procedures have been on the rise since 2009, with over 13.1 million total procedures performed in the past year. Going into the new year, Dr. Steven Turkeltaub, a board-certified plastic surgeon in Arizona, says if there is some improvement in the economy there will be an increase in aesthetic procedures being performed as more patients will be in a better financial state. Additionally, Dr. Turkeltaub discusses some cosmetic treatments to help patients feel and look younger, despite the economy, during the transition into a new year.

At his Arizona plastic surgery practice, Dr. Steven Turkeltaub says he has seen an increase in cosmetic enhancements during this current holiday season. He notes the holidays have traditionally been a particularly popular time of year for people to undergo aesthetic procedures, and adds that the extended holiday vacations offer an opportune time for many patients to seek both surgical and minimally or non-invasive procedures such as BOTOX® Cosmetic injections that can improve appearance as well as boost self-confidence. “The increase in surgical procedures around the holidays is likely related to people being off from work or having a much lighter schedule at this time of year. They may also have more help at home.”

For patients looking for affordable yet noticeable enhancements, Dr. Turkeltaub says that non-surgical injections and dermal fillers like Juvederm®, Restylane® and Radiesse® and BOTOX in Phoenix provide low-cost alternatives to surgical procedures and can provide immediate and effective results with little to no downtime for recovery. He notes that patients often look for simple procedures during the holidays that will improve their self-confidence during the stressful and often physically-taxing holiday season. “Non-surgical procedures such as BOTOX® injections and facial dermal fillers can affect enough changes for many people to produce noticeable improvements such as looking more youthful and relaxed, less angry and less tired.”

Although minimally invasive procedures can produce effective improvements in a patient’s appearance, Dr. Turkeltaub says they cannot truly substitute for the results and dramatic transformations of surgical enhancements like a facelift or breast augmentation in Phoenix. “Non-surgical procedures can provide improvements, but they are not a true replacement for surgery when it is indicated. Undergoing single and straightforward surgical procedures such as a breast augmentation rather than the performance of multiple ones together at far greater costs can improve one’s appearance without breaking the bank.”

Dr. Turkeltaub states that regardless of whether patients choose a surgical or non-invasive path to attain an improved, rejuvenated appearance and increased confidence, he recommends consulting with an experienced board-certified plastic surgeon before considering any treatment. He adds that through the honed skills of a board-certified surgeon, along with a dedicated staff, patients can experience the benefits of a fresh start to the new year with higher quality cosmetic results.

Dr. Steven Turkeltaub completed both his undergraduate degree and his medical degree in the Six-Year Medical Program at Boston University, graduating summa cum laude, where he was also a member of the Phi Beta Kappa scholastic honor society and the Alpha Omega Alpha medical honor society. He trained during a general surgery residency at the University of Miami/Jackson Memorial Hospital in Miami and Northwestern Medical Center in Chicago, in addition to a plastic surgery residency at the University of Massachusetts Medical Center. Dr. Turkeltaub is a member of the American Society of Plastic Surgeons, the Arizona Society of Plastic and Reconstructive Surgeons, the Arizona Medical Association, and several other professional societies. His past appointments include two terms as President of the Maricopa County Plastic Surgeons Society and one as Secretary/Treasurer, as well as Clinical Instructor and Attending Physician in Plastic and Reconstructive Surgery at the University of Massachusetts Medical Center. Dedicated to continued education in plastic surgery, Dr. Turkeltaub has been published in several journals and books and attends many national symposiums each year to keep up with the most effective techniques. He is board-certified by the American Board of Plastic Surgery.

Dr. Turkeltaub’s practice, the Arizona Center for Aesthetic Plastic Surgery, has two locations at 10290 N. 92nd St., Suite 207 in Scottsdale, AZ and 18275 N. 59th Ave., Bldg. E Suite 126 in Glendale, AZ, both reachable at (480) 451-3000. The practice can also be contacted online via the website www.turkeltaub.com, www.arizonabreast.com, or facebook.com/drturkeltaub.