Skip to main content
Posted on Sep 11, 2011 in Liposuction

Aside from the love handles and breasts, an area that many men would like to improve the appearance of is their abdomen. Many note localized areas of fat; others don’t like the generalized protuberance. They are hoping that liposuction will be able to address their concerns.

Men do have fat distribution of their abdomen that is distinctly different from that of women. As a result, this can translate into potentially different recommendations and approaches. Whereas most of the fat of the abdomen in women is situated just deep to the skin where it can be removed utilizing liposuction, a substantial amount of the fat in men is actually located inside the abdomen around the bowel where it is not accessible through liposuction.

I do see many men with protuberant abdomens (beer bellies) hoping that a few hours of liposuction will provide them with fairly flat tummies, though not necessarily with a six-pack. Unfortunately, such is not the case when the majority of their fat is intra-abdominal. The treatment in these situations, at least initially, is considerable weight loss. 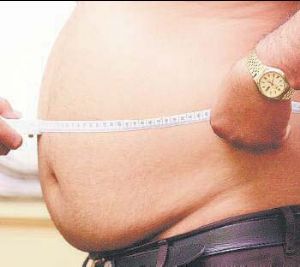 Not a candidate for abdominal liposuction. Fat is largely inside the abdomen.

A lot of men do present with either localized or generalized fat deposits of their abdominal wall which can be successfully treated with ultrasonic assisted liposuction resulting in a flatter and more sculpted appearing tummy. This can be combined with liposuction of other areas as well as with other cosmetic procedures.

If you would like more information on liposuction of the abdomen or other areas, or for any other plastic surgery procedure that I perform, please feel free to contact my office at 480-451-3000. My office would also be happy to schedule you for a complimentary consultation with me.