What is “breast implant illness” (BII)?

This is the term coined to encompass a one or more relatively non-specific and variable symptoms (such as headaches, fatigue, rashes, memory impairment, etc.) that some individuals who have breast implants state that they are experiencing. This vagueness can involve any of more than fifty non-unique symptoms. So far there have been no specific physical manifestations or laboratory tests that can identify or explain the symptoms.

A large percentage of these individuals have high anxiety levels for a variety reasons. They are also stressed.

The general consensus in the plastic surgery community for the treatment of breast implant illness is to undergo an explantation (implant removal) and capsulectomy (removal of the scar tissue/capsule which naturally forms around the implant). That being said, no particular type of capsulectomy has been recommended or proven to be the best and no guarantees are made with regard to the outcome of this whole approach.

Unfortunately, there are a small number of very unscrupulous surgeons across the country who have been preying on vulnerable individuals with purported breast implant illness. They claim that only they have the knowledge, expertise and skill required to effectively treat women afflicted with this problem. This is further facilitated with extensive marketing, proclaiming themselves as “the experts”, especially on social media sites. They often instill fear in women who feel that they have the disease.

Using this approach, many of these ethically challenged surgeons then exploit patients by charging obscene amounts of money for a procedure that was never scientifically proven to be the definitive treatment.

The procedure that they are touting is called an en bloc capsulectomy. This is the total removal of the scar tissue around the implant, called the capsule, intact and in one piece. 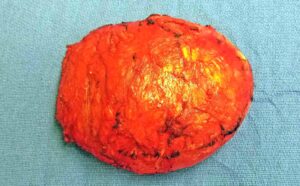 Other approaches that have been recommended by plastic surgeons include a partial capsulectomy, total capsulectomy or just explantation alone.

The self-proclaimed experts resolutely declare that these other approaches are not only not the standard of care but, in fact, are inferior care. Of course, as previously stated, there have not been any rigorous scientific studies done relating to this issue whatsoever.

A prospective blinded study recently completed, entitled “Impact of Capsulectomy Type on Post-Explantation Systemic Symptom Improvement: Findings From the ASERF Systemic Symptoms in Women-Biospecimen Analysis Study: Part 1”, sought to determine whether there was a scientific indication for specifically for “en bloc” capsulectomies in women seeking treatment for their breast implant illness. The study evaluated 150 consecutive patients between 2019 and 2021. There were separated into three groups: women with systemic symptoms they attributed to their implants who requested explantation; (B) women who had breast implants and were not experiencing symptoms and are either wanted an implant exchange or explantation; and (C) women seeking a breast lift who never had breast implants.

The study results revealed that those women who had a diagnosis of BII experienced a statistically significant improvement of their symptoms following explantation and capsulectomy. These results persisted for at least six months.

The more explosive and important finding was that this improvement of symptoms was totally independent of the type of capsulectomy performed. Specifically, the long term results were the same regardless of whether a partial capsulectomy, total capsulectomy or en bloc capsulectomy were performed.

So, at least based on this well designed prospective scientific study, if you think that you are experiencing BII, seek out a reputable board certified plastic surgeon to evaluate your situation. If they ultimately recommend that you undergo an explantation with a partial or total capsulectomy – don’t run for the hills and insist that ONLY an en bloc capsulectomy is appropriate for you.

If you do, you may pay a lot more, have lesser care and potentially a higher risk for untoward outcomes.

If you are interested in scheduling a consultation with me regarding cosmetic breast surgery, please give my office a call at the Arizona Center for Aesthetic Plastic Surgery at (480) 451-3000 or contact us by email.