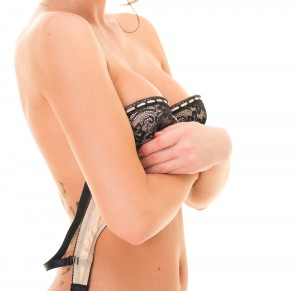 The incision that I have preferred for virtually all of the primary breast augmentations that I have performed on my patients over the years has been the inframammary one. There have been several reasons for this including the relatively inconspicuous location and scar healing, a lower risk of the development of capsular contracture (firm scar around the implant making the breast feel hard), better surgical exposure that also allows for greater control and precision for the dissection and what intuitively seemed to me to be an approach with a lower risk of affecting the nipple-areola complex sensation. There was no large study performed that evaluated the possible effect of the incision location on nipple-areola complex (NAC) sensation … until now.

Finally, we seem to have a more definitive answer to this issue.

A large retrospective (evaluating patients who already had surgery) study was performed in Italy that evaluated the possible effect of incision location for breast augmentation on the subsequent sensation of the nipple-areola complex. This involved over 1200 women who had the surgery performed by a single surgeon over a more than 6 year period of time using either an inframammary or a periareolar incision. Variables evaluated included patient age, breast implant size, and implant pocket location (in front of or behind the muscle).

Implant size had no significant impact on the sensitivity of the nipple-areola complex postoperatively. Neither did the age of the patient nor whether the implant was placed in a submuscular pocket (behind the muscle) or submammary pocket (in front of the muscle). The only factor that had a statistically significant effect on the sensation and discomfort of the NAC was the incision location. The periareolar approach resulted in either a decreased or total loss of sensation in 9.5% of patients versus 3.5% with the inframammary one. This translates into a 2.7 times greater risk for sensory loss with the periareolar incision as compared to the inframammary one. The analysis also revealed that the periareolar incision led to a 3.5 times greater likelihood of experiencing areolar pain.

This study provides even more scientific proof of the superiority of the inframammary incision for breast augmentation surgery.

For more information on breast augmentation surgery or on any other plastic surgery procedure that I perform, or to schedule a consultation with me, you can call my office at 480-451-3000.