Arm lift surgery (brachioplasty) has become a frequently requested procedure and a more mainstream request versus when I first started practice here in Scottsdale thirty years ago. There are a few quite rational reasons for this increased popularity notably a larger aging population that is healthier and wants to look better and the epidemic of obesity and the related countless individuals who subsequently sought out and experienced massive weight loss leading to flabby, excess skin. Of course, the media has also played a role in making the public more aware of this procedure with its exposés of a variety of celebrities.

The standard brachioplasty involves an incision in the axilla (armpit) and one extending perpendicular to it down the upper arm to around the level of the elbow region. This longitudinal component is typically placed along the inner and lower aspect of the upper arm in order to make the eventuating scar less conspicuous. Excess skin along with fat is removed resulting in a three dimensional contouring and tightening of the upper arm soft tissue. The result is a more attractive upper arm that should appear slimmer, firmer and with far less hang.

The trade-off of this is the scar which is generally not particularly invisible. Consequently, I recommend to my patients that they need to make sure that the benefits of this procedure significantly outweigh the downside issues. This means that if there is only the most minor extent of drooping of the upper arm skin then an arm lift may not be a prudent choice for them.

There are some variations of this including short scar approaches which make the overall extent of scarring less. However, they typically can only address fairly minor extents of laxity in particular situations making their use somewhat limited.

The following patient of mine is a typical example of a patient seeking arm lift surgery and the ensuing outcome. This 61 year old female, who had lost over fifty pounds over a six month period of time, was unhappy with the substantial and noticeable laxity and drooping of the skin of her upper arms (photos A, C, E and G). She was quite self-conscious about this condition to the point that should would only wear certain types of clothes in order to “hide” her arms. 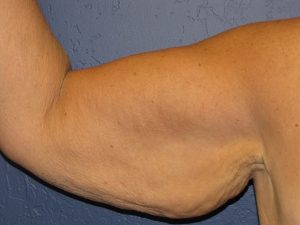 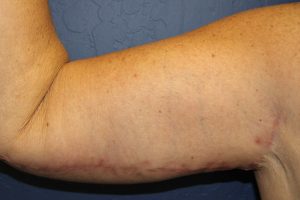 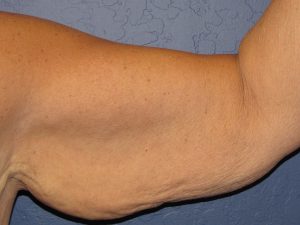 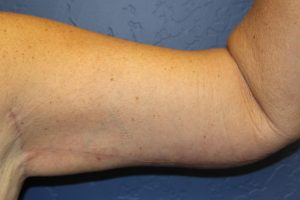 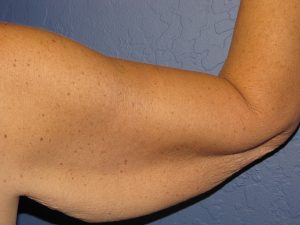 E. right upper arm – from behind 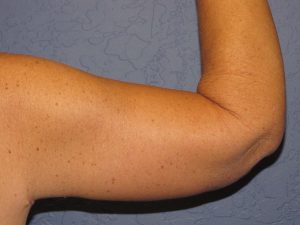 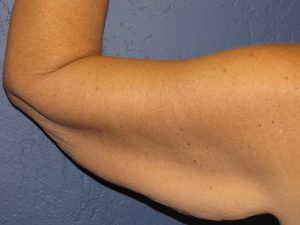 G. left upper arm – from behind 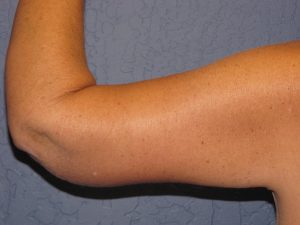 Given the severity of her drooping, it was a no brainer to strongly recommend an arm lift procedure to her as the benefits clearly would far outweigh the eventuating scars from the procedure. She did pursue the surgery and experienced a stunning improvement even at three months as seen in the photos (B, D, F and H).

Needless to say, she was quite ecstatic with the results and with her decision to pursue the surgery.

If you would like more information on arm lift surgery or for any other plastic surgery procedure that I perform or to schedule a plastic surgery consultation with me, please call my office at 480-451-3000.