Lipomas, which are fatty tumors, are benign, very common and not medically concerning (see: What Are Lipomas?). Most individuals with this issue just have a solitary growth that is relatively small and essentially asymptomatic. Others may present with anywhere from a few lipomas up to even 50 or more.

Then there are those individuals whose initially small lipomas kept on growing.

And, they (men, of course) continue to ignore it even despite the repetitive insistence (a.k.a. nagging) of their wives or significant others to have this gigantic mass looked at and finally treated.

(It’s a guy thing, of course to let these things go!)

At some point in time the lipoma became so large that one of the following might have occurred in order for them to seek plastic surgery treatment:

1. It kept on insisting that it was big and old enough to get a cell-phone with its own line.
2. It was constantly complaining about the person’s taste in clothes and didn’t want to be seen in public together.
3. The person couldn’t lay flat in bed on their back – at best, is was more like sitting propped up with several pillows.
4. Many clothes were difficult, if not, impossible to put on and it was suggested to have them custom made to accommodate their lipoma friend.
5. People were wondering if they are a descendant of Quasimodo (the Hunchback of Notre Dame).
6. They had difficulty in turning their head and even seeing in one direction due to the enormous size of lipoma – making driving and even finding the TV remote challenging at times.

Here is one such patient and his lipoma – a true Leviathan of Lipomas:

This gentleman had his lipoma for in excess of ten years – longer than many marriages and longer than the life span of many dogs. Numerous times over these years, his wife insisted that he have it evaluated and removed but he just ignored the advice as well as the lipoma.

Well, it continued getting larger and larger with time until he essentially had two heads on his shoulders – and both were hair challenged.

So he sought treatment. 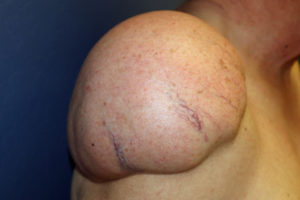 A. Lipoma right shoulder. Right side of neck in background 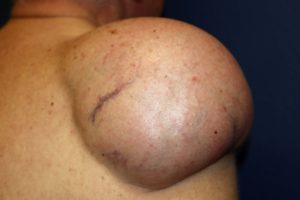 B. Lipoma of right shoulder seen extending down back.

I recommended that it needed to be surgically removed which was performed under general anesthesia as an outpatient. In addition, a sizable amount of stretched, excess skin was excised at the same time. This was successfully accomplished with virtually no discomfort and no untoward issues. 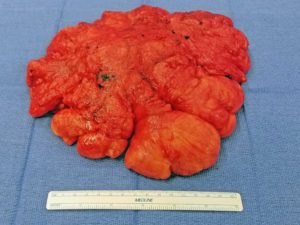 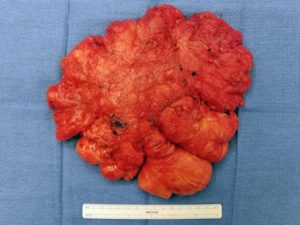 At just one week after surgery, he looks amazingly normal. 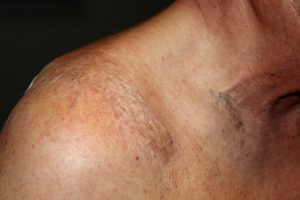 E. One week after surgery. Steri-Strip is on the incision.

However, I’m not sure whether or not he is now suffering separation anxiety from his lipoma.

If you have one or more lipomas which you would like to have removed, no matter what the size, you can contact my office to schedule your consultation.